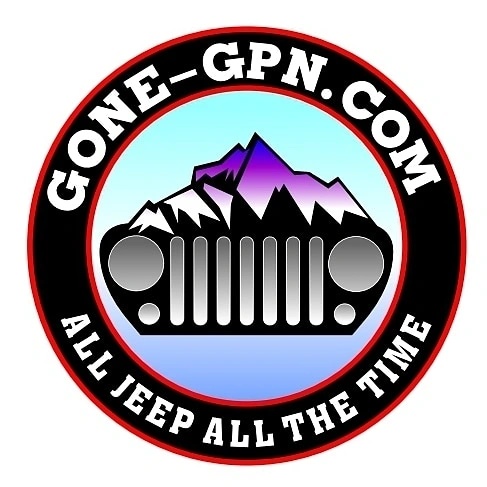 GONE-GPN All Jeep all the time!

Rick Péwé started his jeeping career in Arizona, 1972 with the purchase of his first jeep, a 1945  Ford GPW. He had already learned to drive a Jeep 5 years previous in a ’52 CJ-3A Jeep, under  the direction of his father. After rolling the GPW off a cliff in 1973, Rick rebuilt the entire vehicle and drove it through high school and college, where he received a Bachelors degree in Geography.

In 1980 Rick joined Republic Sales in Chicago, a major Jeep parts wholesaler with an office in Tempe, Arizona. In 1984 Rick purchased the Tempe office and opened Republic Off Road Center, a wholesale, retail, and jeep repair facility. After ten years of business growth,  participating and sponsoring off road racing, and many successful Jeep creations, Rick was  asked to join Petersen Publishing as the feature editor of Petersen’s 4-Wheel & Off Road  Magazine, located in Los Angeles, California. Working under the tutelage of David Freiburger,  Rick soon became Technical Editor of the magazine. In 2000 Rick was named editor of Jp  Magazine, devoted solely to the Jeep brand of 4x4 vehicles. After two years of building Jp  Magazine into a well known brand, Rick was named Editor-in-Chief of Petersen’s 4-Wheel & Off  Road Magazine. Rick developed the Ultimate Adventure series of events for the next 15 years,  taking 4x4 enthusiasts all over the US for a week of hard core 4x4 adventures, and producing a  DVD of the exploits. Rick also helped win the Baja 1000 off road race in 2008 while co-driving with Rod Hall in the H3 Hummer race vehicle. In 2014 Rick was named as the Content Director  for the Four Wheeler Truck group, and responsible for the growth and digital strategy of Four  Wheeler, Petersen’s 4 Wheel & Off Road, Jp, Dirt Sports, Off-Road, 4Wheel Drive and Sport  Utility, and Mud Life magazines. In 2016, Rick returned to lead Jp Magazine due to his extensive  experience with Jeeps of all types and well-known connection to the brand. As a inductee to the  Off Road Motorsports Hall Of Fame class of 2010, Rick is well known for his Jeep trips and  exploits around the globe, and starting the Dirt Every Day tours with David Freiburger. In 2020  Rick retired from the publishing world to concentrate on more Jeep event and adventures, as  well as catching up on his collection or over two dozen Jeep projects.

A passion for anything on wheels (especially off-road vehicles) led to a life exploring the mountains and deserts of the American Southwest and Baja California, as well as a career in automotive journalism, including former editorial staff positions on Four Wheeler, 4Wheel & Off-Road, and Jp Magazine. The first car I built was a Baja Bug. There have been many more vehicles of all sorts in between, but my current collection includes a 1979 Jeep Cherokee Chief, 2006 Jeep Wrangler TJ, and a 2018 Toyota Tacoma 4x4 TRD Off-Road pickup.

I grew up wheeling Jeeps and lifted Chevy trucks and worked in the off-road industry after high school and through my college years. My career path took me elsewhere for a couple of decades, but getting out in a Jeep was always my way to rest and relax. I have always had a passion for photography and the outdoors; and after retiring from my previous career, I returned to my love of off-road, Jeeps and photography. I worked as a freelancer for Jp Magazine for several years which helped to further fuel my passion for all things Jeep. I have also had articles and photos published in Roadkill, 4-Wheel & Off Road, Four Wheeler, Summit Daily, and the 4 Wheel Parts online magazine.

Chris’s career as an international photojournalist spans more than two decades. He has contributed to publications such as National Geographic Adventure, Four Wheeler, Motor Trend, Jp, and Explorer, had a seven-year tenure as editor-in-chief of Overland Journal. In the process he has reported the Dakar Rally, Australasian Safari, and Moroccan Outback Challenge, and crossed all seven continents by four-wheel drive. Commercial clients include Ram Truck, Jeep,  Mopar, ARB, Webasto, and Dubai Publishing, and he is the North American correspondent for a  dozen international magazines. A few of his accolades include OWAC Writer of the Year,  CA4WDC’s Presidents’ Award, and in 2015 he was inducted into the Off Road Motorsports Hall  of Fame as a pioneering journalist. When he’s not out Jeeping, Chris might be found working  hard on The Office (his sailboat) enjoying a coldy with his wife Suzy.

My love for off-roading began very early on while bouncing up rough mountain roads to collect winter  firewood with my dad and two brothers. Family camping and hunting adventures in the mountains led  to a deep-rooted love of the outdoors and four wheel drive vehicles. My passion for Jeeps began around the age of 15 when my best friend got his license and we started taking his dad's CJ-2A into the  mountains east of his farm. I'd never seen a vehicle with three gear shifters. We spent the summer of  1993 restoring a 1951 Willys Overland pickup purchased by his grandfather in the '60s. Another  highschool friend had a CJ-7 that we took over all the hardest trails in the local mountains. We beat it  so badly, we cracked the frame. Those trips convinced me I had to own a Jeep. After completing my Asociates Degree at a local college, I served a two year volunteer mission for my  church in Brazil. I returned home from the jungle in 1998, and promptly bought my first Jeep. The little 4-cylinder YJ seemed to break down all the time. Out of sheer economic nessecity, I learned to fix the  jeep myself and began devouring every scrap of information I could find about Jeeps and how to  modify them. That Fall, I returned to college to study mechanical engineering, just as the internet began to really come online. Discovering internet forums and Ebay helped fuel my passion even further. I worked in the automotive upholstery industry since the age of 15 and decided to leave college in  2000, to open my own shop. That business led me to SEMA and an entire universe of off-roading  previously unknown to me. I began volunteering at check points for the Best In The Desert off road  race series and became involved with the local off road club. In 2006, I accepted a friend's invitation to  do the Hole In The Rock trail in Southern Utah, I experienced rock crawling for the first time and was  instantly hooked. I began a years-long build up of my YJ to make it more capable for slickrock, and  began to collect project Jeeps in my spare time. To date, I've collected nearly 20, ranging from flat  fenders to a ZJ “five-niner.” In 2015, I was invited to join a growing YouTube channel as a video producer and over the next four  years, produced over 90 videos, helping to propell it to over 300,000 subscribers and nearly 1.7 million  views per month. In 2019, I left the channel to start my own. Almost simultaneously, I was invited to  join the staff of Gone-Gpn to help manage their YouTube operations and create video content for their  social media platforms. I look forward to bringing you great off road content and useful information to  help fuel your Jeep obsession!

Freelance Multi-Media Producer-Director has been creating content for the  off-road industry since 1995. Michael’s Producing/Directing career started while serving in the USMC. Directing news,  filming off-road safety PSA’s, and covering desert warfare training exercises.  Michael’s professional career includes Broadcast Television Production, Advertising &  Marketing, and Owner/Producer at Big Sky Post & Productions in Santa Monica, CA working  with some of the industry’s most talented and demanding clients. Michael’s passion for his work and the great outdoors is what drives him to thrive in the off- road world working with industry leaders while creating memorable off-road stories for  enthusiasts. When he’s not shooting or editing, you’ll find him experimenting with new  camera gear, tinkering with his Jeep and wheeling remote locations in search of the next story. Michael is always up for a brain-storm session about your next project and freely offers his experience and advice.

Professionally I am a product design engineer for a tier 1 supplier supplying the interior door panels on the Jeep JL Wrangler. My full time hobby is creating Jeep related YouTube videos.

Growing up my step dad and brother were car nuts but I had no interest in anything automotive. I was more interested in computers, animation, and film. My sophomore year of college I traded my 1990 Plymouth acclaim for a 1994 Jeep Wrangler  for a change of pace. Unknowingly I had changed the pace and direction of the rest of my life. The Jeep broke almost immediately in every way possible. My lack of funds and encouragement from a good friend lead me to pick up a wrench and start doing the work myself. Before I knew it all I can think  about is cars and all I wanted to do was log hours in the garage.

An internship in the automotive industry convinced me that I wanted my hobby to be my career as well. I organized all of my electives to be automotive based, I created a university club so that I could attend SEMA as a student, and I designed my own set of aftermarket jeep taillights that pitched to everyone at the show. Upon graduation I applied exclusively in Metro Detroit and moved 10 hours from family an friends to work in the auto industry. Once settled I decided to merge my previous passion of film with my current passion, Jeeps. I started a YouTube channel, Jeep Sheep TV and filled it with how to videos for working on my 1994 Wrangler.

Now I have joined the Gone-Gpn team and I am eager to learn from some of the greatest minds in Jeep media.